The original Theatre Building was built in 1885 by Charles Caskey. Mr. Caskey built numerous mansions here on Mackinac Island and most importantly he built the Grand Hotel. The first use of our building was a Roller Rink. In 1895 it was a dance hall. In 1907 it was a family theatre with “moving pictures”. In 1923 it became a Motion Picture theatre. From 1917 to the present it was called the Orpheum Theatre.

Hundreds of years ago this area was part of an Indian burial ground, which probably explains why the theatre is so haunted. There is never ending wailing at night and the bats go berserk once it gets dark.

The Haunted Theatre came into existence in 1974. Thanks to the foresight of Mr. Frank Nephew & Robert Benser. They knew that the Mackinac Island locals and summer tourists would well appreciate the opportunity to partake of good old-fashioned laughing and screaming. One of the Monster Makers was Dale Kuipers whose art work still inhabits the theatre after all these years. Dale brought to life some interesting Island Indian legends. Mr. Welden Blum, the owner of the longest running haunted house in the world still walks the halls of The Haunted Theatre. His handiwork, engineering, & artistic touches never cease to amaze us.

Come join us for some good old fashioned family fun. We are THE Family Fun Attraction on Mackinac Island. Everyone is welcome, young and old and everything in between.

MILITARY PERSONEL and NATIVE AMERICANS get in FREE!

Special hours are available for your special event - contact us for details!

We are available by appointment for your convenience.

Be sure to visit 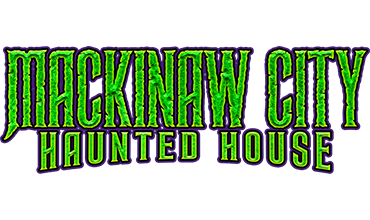